Although I was a little late to check out Steven Moffat and Mark Gatiss’ Sherlock, it didn’t take much time for me to become part of the show’s worldwide fandom. When I decided to check out the first episode on Netflix a few years back, I remember being struck with the visuals in the first episode, “A Study in Pink” (A riff off the Sir Arthur Conan Doyle story “A Study in Scarlet”). Four series later, I am so glad that I did. It has made me anxious during episodes, but it has also given me so much joy and laughter. Here are ten reasons to love the Moffat-Gatiss brainchild*:

*Caution there may be spoilers ahead

10. The musical works from David Arnold and Michael Price

The instrumental works from David Arnold and Michael Price present in every episode add so much emotion to the scenes. Whether it is an intense chase like in the very first episode or perhaps the sorrowful music present in the second series, the show would be amiss without the brilliant musical pieces from Arnold and Price.

9. The twists and turns in every episode

Take the very first episode “A Study in Pink” for example – the writing is paced in such a way that you feel whisked away as Dr. John Watson and Sherlock Holmes work to solve the case of Jennifer Wilson, the deceased woman in pink. The writing adds suspense and mystery as viewers surprisingly learn of each and every case’s development.

The show does a tremendous job reflecting its literary predecessor written by Sir Arthur Conan Doyle. The episodes taken as a whole, from “A Study in Pink” to the traumatic “Reichenbach Fall” episode connects well to the iconic Holmes detective stories. The show also features characters present in Doyle’s works including one of my favorites in Una Stubbs’ sassy portrayal of Sherlock’s landlady, Mrs. Hudson.

7. The set design most notably Sherlock and John’s shared flat

The set design for Sherlock’s flat is beyond-words incredible. Take a gander for yourself at the heavy level of detail including the yellow graffitied smile adorned with bullets from “The Blind Banker” episode. I would absolutely love to sit in one of the chairs and enjoy a cuppa prepared by Mrs. Hudson.

6. The visuals incorporated in each episode

Especially present in the first episode, the show introduces us to some really cool visuals as Sherlock examines the body of Rachel Wilson, the woman in pink. It adds a really cool component of the show as we can read Sherlock’s thought processes during a scene.

I think at one point or another we all wish we could enter our own mind palace. Sherlock’s mind palace provides yet another really cool visual element to the show that comes into play over the course of the series as he works through his memory to gain clues on cases.

The show presents us characters and brilliantly sees them changing throughout the four different series. Take for example Dr. John Watson – when we first meet him he’s dealing with returning from the war in Iraq before he soon finds a new sense of purpose working alongside Sherlock Holmes. He eventually finds love with Mary Morstan (portrayed by the amazing Amanda Abbington) and grows a mustache that everybody else hates. Sure there are more elements that happen to his character throughout the four series, but I don’t want to absolutely spoil everything here.

The show utilizes humor alongside serious moments through the course of the show. Take for example the stag night portion of “The Sign of Three” episode from the third series. Or when Sherlock is brought to Buckingham Palace in only a white bedsheet for a case in “A Scandal in Belgravia”. The show amazingly alternates between humorous bits to tense dramatic scenes the next.

2. All of Sherlock’s insults

It’s safe to say that Sherlock is the king of delivering insults whether intentional or not. His insults especially toward one of the forensics team members, Phillip Anderson are something to behold. 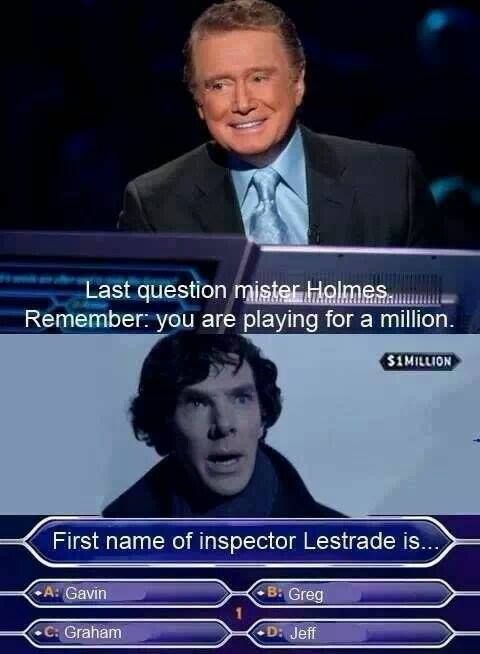 Is it Gavin? Is it Graham? Sherlock will never know despite working alongside him on cases or texting him for assistance on multiple occasions. It is definitely one of my favorite parts of the show.

What are your favorite parts of BBC’s Sherlock? Comment with your picks below!!

This site uses Akismet to reduce spam. Learn how your comment data is processed.